In the Electrical and Mechanical world, almost everything heats before it fails. This is why Infrared Thermography in the hands of a Qualified and Knowledgeable surveyor is the single most time and cost effective discovery tool for the assessment of electrical system health and fire prevention. At Armco Infrared, all electrical heath surveys are performed by an experienced Level 3 Certified Thermographer and NC licensed electrical engineer.

It is understood in this business that the absolute temperature of the finding or anomaly is not necessarily a good indicator of a potential for failure at any given time. Ventilation, heat sinking and design operating temperatures are also factors. Armco Infrared determination of the priority or Level of Criticality for a finding is influenced by recent history as provided by our facility Qualified Assistant as well as the amount of temperature rise above a similar or similarly loaded component. Very high temperature differences indicate that we may be nearing the end of the fault cycle. Elevated but relatively lower temperature differences combined with corroded or otherwise deteriorated appearance is a strong indicator of impending failure without historical information to the contrary.

Armco Inspections Infrared Division through association with the national ElectricIR.com network, has adapted the Electric Power Research Institute (EPRI) standard for “criticality” of a finding or anomaly as shown in the blue box below. This conservative standard or guide has been chosen as it is clear, easy to interpret and does not necessarily require load measurements

This standard has the temperature rise above an adjacent similar reference (phase conductor or ambient temperature). Our position is that finding repair priority is a function of the equipment use or purpose (as given by the client/qualified assistant) as well as that of a given temperature difference (delta T) compared to the reference. Armco Infrared also recognizes the need to include emissivity, air movement, solar loading, reflected thermal radiation and interior reflected temperature depending on the location and immediate conditions.

In many cases, a particular circuit will not be operating at full rated load current. On all findings to be included in our reports, the circuit load (amperes) will be measured and included in the logged data along with the device rating. The InspecTrend report will create a projection of temperature for successively higher loads so that the thermal limits of increasing a given circuit current may be considered by the client. In the chart below a multiplier factor of 3 for 50% load is shown. 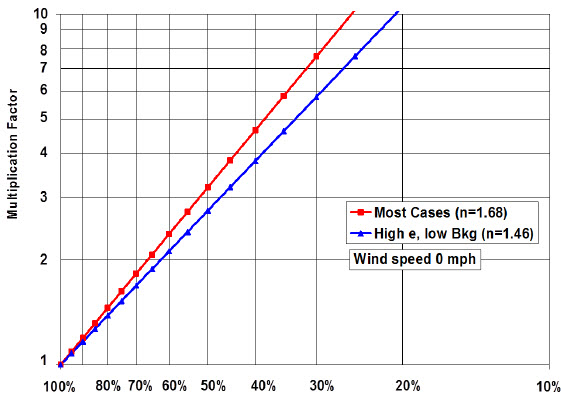 As an example, for a typical Molded Case Circuit Breaker (MCCB) the loaded maximum temperature for the case is generally considered to be 140 to 160 degrees F. If we observe a particular MCCB at 30% measured load and operating at 100 degrees F, the projected case temperature at 80% load will likely be much greater than acceptable. This is a situation where the comment/opinion of the Qualified Assistant is essential as he/she should be able to say if the circuit may experience higher loads than currently measured and if so how much.